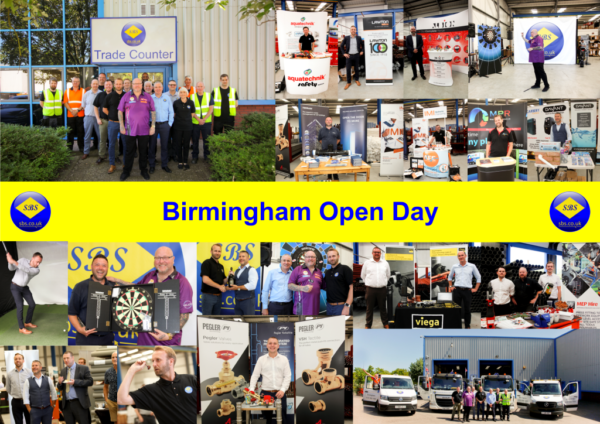 SBS Birmingham held their open day on the Friday 5th July. The event started from 11:30am where customers, staff and suppliers celebrated the official opening of the newly relocated Birmingham branch. The premises are located on Alpha park in Smethwick, Birmingham.

Special guest Andy “the hammer” Hamilton attended and challenged the attendees to beat him at Darts. He was a former world finalist and was also runner-up in the 2007 Grand Slam and 2013 UK Open, so there was no pressure to beat the legend. Steve Bath from Polypipe Building Services (Terrain), won the competition and he received signed memorabilia as he was the closest to the three darts challenge set by the professional.

The customers were able to enjoy a hog roast and refreshments, along with having the opportunity to meet and socialise with the Birmingham staff and key manufacturers connected to the industry. Merchandise from all company’s present was handed out during the day.

Just over 11 years ago in 2008, SBS Birmingham was opened to service the Birmingham and West Midlands region. This was the sixth branch to opened within the Smith Brothers branch network. The Birmingham branch is now part of a 15-depot network located across England and Wales. All depots are encouraged to follow the SBS promise of Stock, Service and Staff, meaning that with the relocation of the Birmingham branch, they can offer greater depth of Stock due to the move to larger premises.

Andy Clements, West Midlands & North West Regional Manager said “it was great to launch the new branch with a fantastic day.  At SBS we’re all about service, and to now have a 28000sqft branch full of stock it will enable the branch to support more customers in the region and offer a great service.”