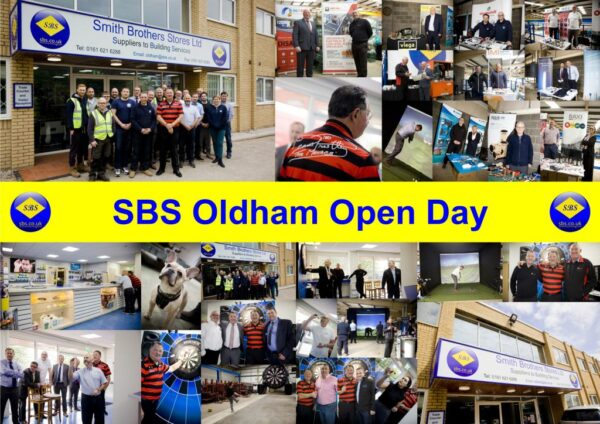 SBS Oldham held their open day on Friday 10th May. The event started from 8am where customers, staff and suppliers congregated in the 40,000 sq. ft. premises located on the Vulcan business park industrial estate, to celebrate the official relocation of the branch.

Dennis “the menace” Priestley and Paul Booth MC were the special guests at the event. In 1991 and 1994 Dennis was the world champion and he was a runner up in the years of 1996, 1997, 1998 and 2000. Staff, customers and suppliers were able to play darts against the legend. Brian Nolan from Charlestown Engineering Services Limited was the highest three dart scorer of the day, winning signed memorabilia as he matched the challenge set by the professional darts player.

Other activities included a golf simulator and an inflatable darts board. On the golf simulator people competed to get the longest drive, where the winner was Joe from Building Environment Solutions with a drive over 300 yards! He received a fourball at the Belfry golf course.

The customers were able to enjoy a hog roast and refreshments, along with having the opportunity to meet and socialise with the Oldham staff and key suppliers/manufacturers connected to the industry. Merchandise from all companies present was handed out during the day.

Since 2006, the Oldham branch was opened to service the Lancashire and North West area. However, over the 13 years of being based at the same premises, Oldham had out grown the warehouse, calling for a relocation. Oldham officially moved into the new building in January 2019, so they can increase the stock levels and offer a better service to their customers.

Oldham Branch Manager, Chris Finn said “Thank you everybody for making the day a great success.”

David Wildman, Branch Director said “thank you to all customers, suppliers and staff for attending and contributing to such an excellent day!”

If you are upset that you missed the action at the Oldham open day, Birmingham are having an open day on the 5th July.