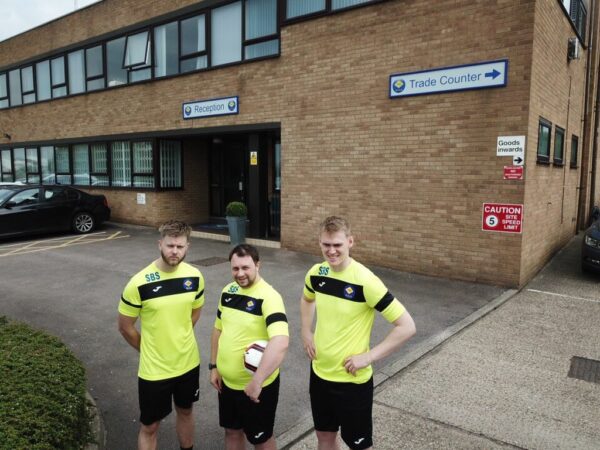 With the Premier League season drawn to a close as Manchester City won. Smith Brothers thought it perfect timing to launch its 19/20 football kit ready for next season. Many customers and staff were keen to see the new SBS colours. In a tribute to the previous football kit, SBS have kept the iconic yellow colour with the logo on the left breast of the shirt. The shorts are the same colour as previously.

The biggest reveal this year is kit sponsor Joma in an undisclosed deal. The yellow of the kit takes inspiration from our warehouse high-vis jackets, which both the HVAC industry and our customers will be fond of seeing. This meaning next time you see a staff member, warehouse or delivery driver you will be reminded of our 5 a side football colours.

With acknowledgement of our previous kit, the new first choice strip adorns black stripes across the chest and the sleeves, with the showcase piece on the left breast – the logo of Smith Brothers. The shirt mentions SBS in on the right shoulder of the top, in the characteristic SBS blue. These are the newest features on the launch of the kit.

In a bid to continually improve the kit, SBS have listened to members of staff to improve the key design and features, to offer better durability and comfort. The mark the release of the new design, the kit was officially launched by a video created by the company to show the world. The video showcased the star players within SBS Leicester who kindly modelled the strip while showcasing their footballing skills for next season. They welcome challengers and fear no one whilst SBS have their very own Jamie Vardy in leading goal scorer, Nick Smith, who is leading the attack.

The company thought it was fitting for SBS Leicester to host the launch due many comparisons with the city’s football team, LCFC. Leicester is the home of the Premier League winners of the 15/16 season when the odds to win was 5000-1. The city is the birth place of the legend Gary Lineker, who now presents Match of the Day along with Guinness World Record holder Jamie Vardy, who has the record for a 11-game goal-scoring run in the Premier League.