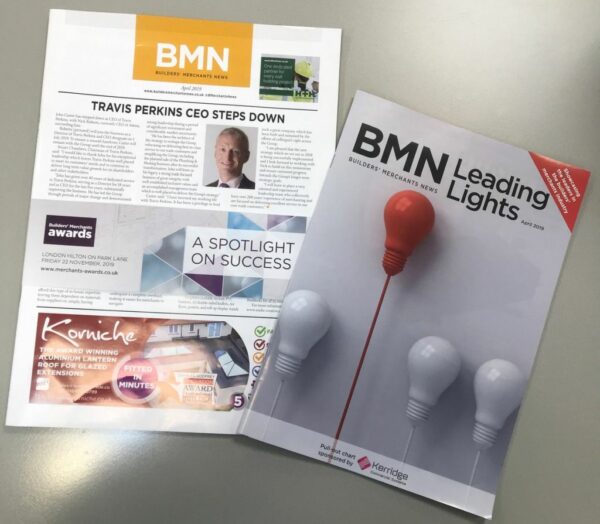 The Leading Lights supplement is released by the industry recognised magazine Builder’s Merchants News. The supplement shows growth of the merchant industry in 2018. The good news is that Smith Brothers were featured as number 10 out of the 30 listed businesses. This is the first time for SBS to be featured in the Top 10 merchants.

In the supplement it compares each merchant by looking at the previous turnover to the current turnover, the percentage change, the number of branches and employees at the end of a company’s financial year.

Over the five years of the magazine being published, Smith Brothers has shown a significant growth year on year, regarding the turnover and even the branches. Since 2015, the recorded turnover has increased by 80%, highlighting that the SBS promise of Stock, Service and Staff is clearly making an impact on the performance of the company.

The number of branches has increased by five with the openings of Heathrow, Cardiff, Merseyside, Newcastle and Head Office, in the last five years. The business has also relocated two of the branches in Leicester and Bristol, and have announced three relocations of the Birmingham, Oldham and Thurrock branches this next financial year.

Builders’ Merchants News put this report together by reviewing the industry, by comparing different business performance over 2018. They contacted the merchants directly (where possible) to get clear and concise information, rather than relying on published information that is readily available. The supplement considers national and independent merchants, as well as outlining the problems of the market in the coming year.

The main challenge that the report discusses is the effects of Brexit to a merchant. Builders Merchants News conducted a survey with industry experts to consider the six main issues which are: sales, prices, overall stock levels, imported products, number of employees and rules & regulations.

All people who took part in the survey agreed that the issue affected the most will be the prices on products, as value of stock has already been impacted since the announcement of Brexit. However, the merchant believe that imported products from the UK, may decrease in price.

The survey showcases that it is good news for employees of a merchant, as most people believe that the number of staff employed will stay in the same, meaning that they will have security of a job.

If you would like to read the supplement, please access the online version via the link below: